The Distance Between Us/Kasie West 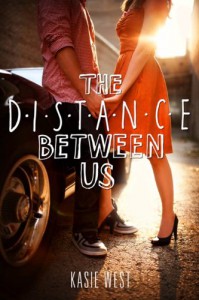 Seventeen-year-old Caymen Meyers learned early that the rich are not to be trusted. And after years of studying them from behind the cash register of her mom's porcelain-doll shop, she has seen nothing to prove otherwise. Enter Xander Spence—he's tall, handsome, and oozing rich. Despite his charming ways and the fact that he seems to be one of the first people who actually gets her, she's smart enough to know his interest won't last. Because if there's one thing she's learned from her mother's warnings, it's that the rich have a short attention span. But just when Xander's loyalty and attentiveness are about to convince Caymen that being rich isn't a character flaw, she finds out that money is a much bigger part of their relationship than she'd ever realized. With so many obstacles standing in their way, can she close the distance between them?

Though I didn't enjoy this book as much as the last book, this still had a very compelling story with very sweet characters.

I didn't enjoy the side characters in this book as much. Xander should have had a lot of friends based on his personality, but those we were introduced to didn't seem like people he'd be around. Caymen's friends just felt immature, especially considering her life.

The college dynamic was interesting, but also didn't feel realistic to me. The process she was or was not going through would have been mirrored in other people, but she felt very isolated in its regards. Other adults in her life would have been putting much more pressure on her too, with counsellors etcetera asking about letters and essay drafts.

Despite this, the main plot was really heartfelt and touching. The ending wasn't entirely predictable, with a minor plot twist coming before the end.

I recommend this book as a young adult romance.