The Beginning of Everything/Robin Schneider 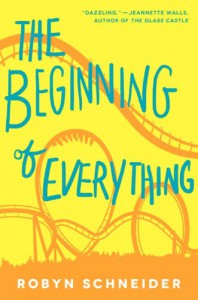 Robyn Schneider's The Beginning of Everything is a witty and heart-wrenching teen novel that will appeal to fans of books by John Green and Ned Vizzini, novels such as The Perks of Being a Wallflower, and classics like The Great Gatsby and The Catcher in the Rye.

Varsity tennis captain, Ezra Faulkner, was supposed to be homecoming king, but that was before—before his girlfriend cheated on him, before a car accident shattered his leg, and before he fell in love with unpredictable new girl Cassidy Thorpe.

As Kirkus Reviews said in a starred review, "Schneider takes familiar stereotypes and infuses them with plenty of depth. Here are teens who could easily trade barbs and double entendres with the characters that fill John Green's novels."

Funny, smart, and including everything from flash mobs to blanket forts to a poodle who just might be the reincarnation of Jay Gatsby, The Beginning of Everything is a refreshing contemporary twist on the classic coming-of-age novel—a heart-wrenching story about how difficult it is to play the part that people expect, and how new beginnings can stem from abrupt and tragic endings.

I absolutely adored this book, its characters, and how they evolved.

This was a love story, but it was also a character-driven tale of self-discovery and understanding what one really looks for in life.

Ezra is going down as one of my favourite YA narrators yet. He's quirky and fun, likable but real. He has his own little mantras, such as his thoughts on personal tragedies, that recur in a way that sometimes makes me shake my head in amusement but are enjoyable and touching.

He leaves his comfort zone and continues to live after his accident that would leave some people unwilling to leave their room. I was constantly impressed by how he just got up and kept going, and I related to his stubborn pride that had him late to classes as he limped.

I loved that Ezra's disability didn't become the only factor of him, yet how at the same time it wasn't forgotten--Schneider slipped it into small moments that made it feel very real.

All of the characters in this book were interesting and memorable. From Ezra's parents to his old group of friends to a younger girl in his new group of friends, I could see everyone having their own life and their own story separate to Ezra's. I enjoyed Toby especially and his good humoured personality.

The ending was gorgeously written, perfectly real, and made my heart clench into a million pieces.

I highly recommend this book as a tale of growing up and really discovering who you are.