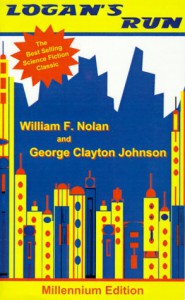 It's the 23rd Century and at age 21... your life is over! Logan-6 has been trained to kill; born and bred from conception to be the best of the best. But his time is short and before his life ends he's got one final mission: Find and destroy Sanctuary, a fabled haven for those that chose to defy the system. But when Logan meets and falls in love with Jessica, he begins to question the very system he swore to protect and soon they're both running for their lives. When Last Day comes, will you lie down and die... or run!

Though I was incredibly excited about the premise of this book, it ended up being centered around action and fighting instead of the dystopia.

This book was written in 1967, so for an entirely different audience than today, which made the writing style intriguing to look at.

As soon as the premise is established, Logan goes on the run and the book turns into an action story, with chases and racing, gypsies and monsters, various climates, and all types of things that are out to kill the pair. Though they were running because of their age, it really wasn't that different than if they'd been branded murderers or something and then had everyone come after them.

The history behind the premise was a little hard for me to digest. In the year 2000, the population of Earth had hit 6 billion and a movement had started to get everyone to die at 21. The youth eventually overthrew all politicians and city councilmen and took over. Nolan's optimism is cute--while there are a lot of youth, the likelihood of American politicians relinquishing power just like that is laughable. He hit the nail on the head with the population issue though.

Another problem I had with the story was in how society functioned. Kids from 14-21 were considered adults. While I think young adults often get a bad rep, it's hard to imagine them being mature enough for the jobs they needed to perform and to look after the other two-thirds of the population. I often found myself feeling like Logan was a lot older and more jaded than a mere 21-year-old.

It was extremely cool to see the technology that Nolan created for this book. While there's an elaborate transportation system to get people around, cell phones aren't a thing, showing how times have changed. Nolan didn't put much time into describing how this technology worked though, and I got kind of confused by how quickly they warped between scenarios.

My favourite scene was one in which he used a new technology to relive parts of his own life. This was a cool gimmick that allowed me to see what growing up in this world was like without having Logan recount it.

For what it was, this book was a good action story, but I thought the dystopian aspect could have been much stronger. I mainly enjoyed it for its age and different style, but I'm not much of a fan of chases and adventure, so I probably didn't appreciate it to its fullest extent.

Overall, though I won't be reading the sequels, I'm glad I did finally get my hands on a copy of this book.